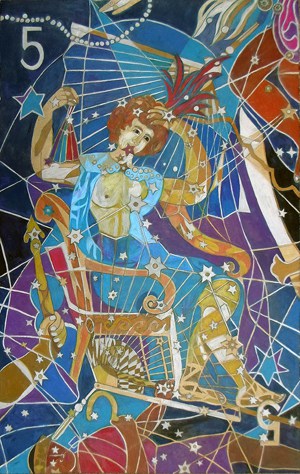 Featured from the Star Suit

This constellation has long had a strong female connection. In Persia, she was drawn by the astronomer al-Sufi as a queen wearing a crown and holding a staff with a crescent moon in her right hand. In Greece, she was Cassiopeia, the queen of whose vain declaration of beauty nearly killed her daughter, Andromeda, and sent her spinning around the north pole for eternity after her daughter was rescued by Perseus.

In some Arab atlases, these same five stars layed out in a w-shape were seen as figure called the "Tinted Hand" which was said to represent a woman's hand dyed red with henna or the bloodied hand of Muhammed's daughter Fatima. In the 1600s, she was seen as Bathseba, Deborah or Mary Magdelene. In early Chinese astrology the stars were seen as a fan.

In my depiction you can see the fan in the background as well as holding one in the background, like an aging theater star trying to hold on to her beauty while surrounded by threats on all sides—as suggested by the many constellations around the edges from traditional Greek-myth-derived star maps.