Marvin Gaye wrote his classic song What’s Going On? in 1971 and nearly fifty years later it sounds like it could have been written today.

I started my Postcards to America series last fall because as the mother of two young men of color problems from policing to mass incarceration to healthcare disparities combined with the challenges of climate change were weighing heavily on my mind.

When the pandemic started, I thought that no one would want to see artwork about these problems, but I needed to address them for my own peace of mind. I was wrong. While there’s a fair amount of push-back judging by the number of people who unsubscribed to this newsletter last month, I am encouraged by the heightened awareness and thoughtful discussions coming from friends and family. 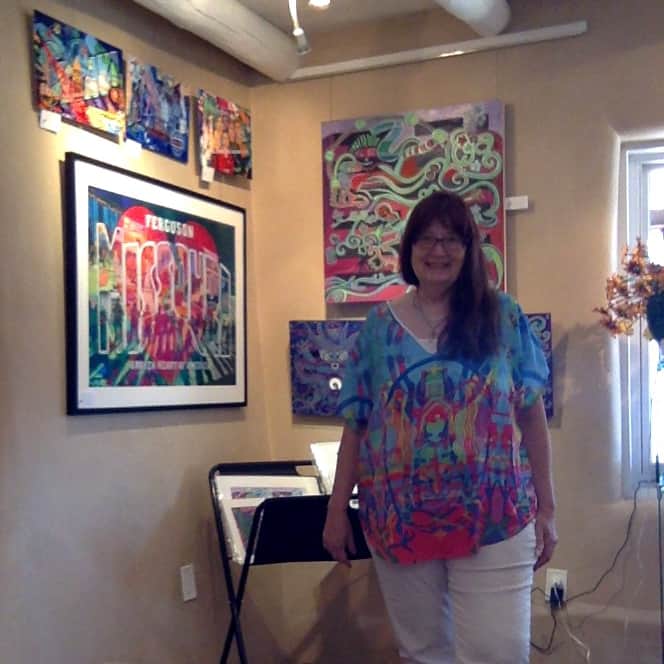 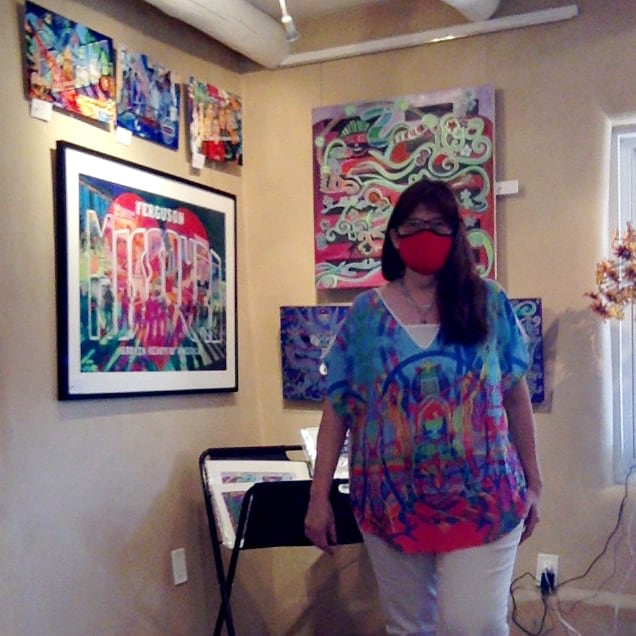 I’m writing this newsletter while spending my third Sunday at the gallery after reopening  and I’m pleased to see that everyone is wearing their masks today.  We have gloves available for going through the print bins. By the way, masks printed with my artwork are available online https://tinyurl.com/ybvgw69n.

There is no first Friday, but we are working on short videos from each artist to show what we’ve each been working on. Check out my video below. 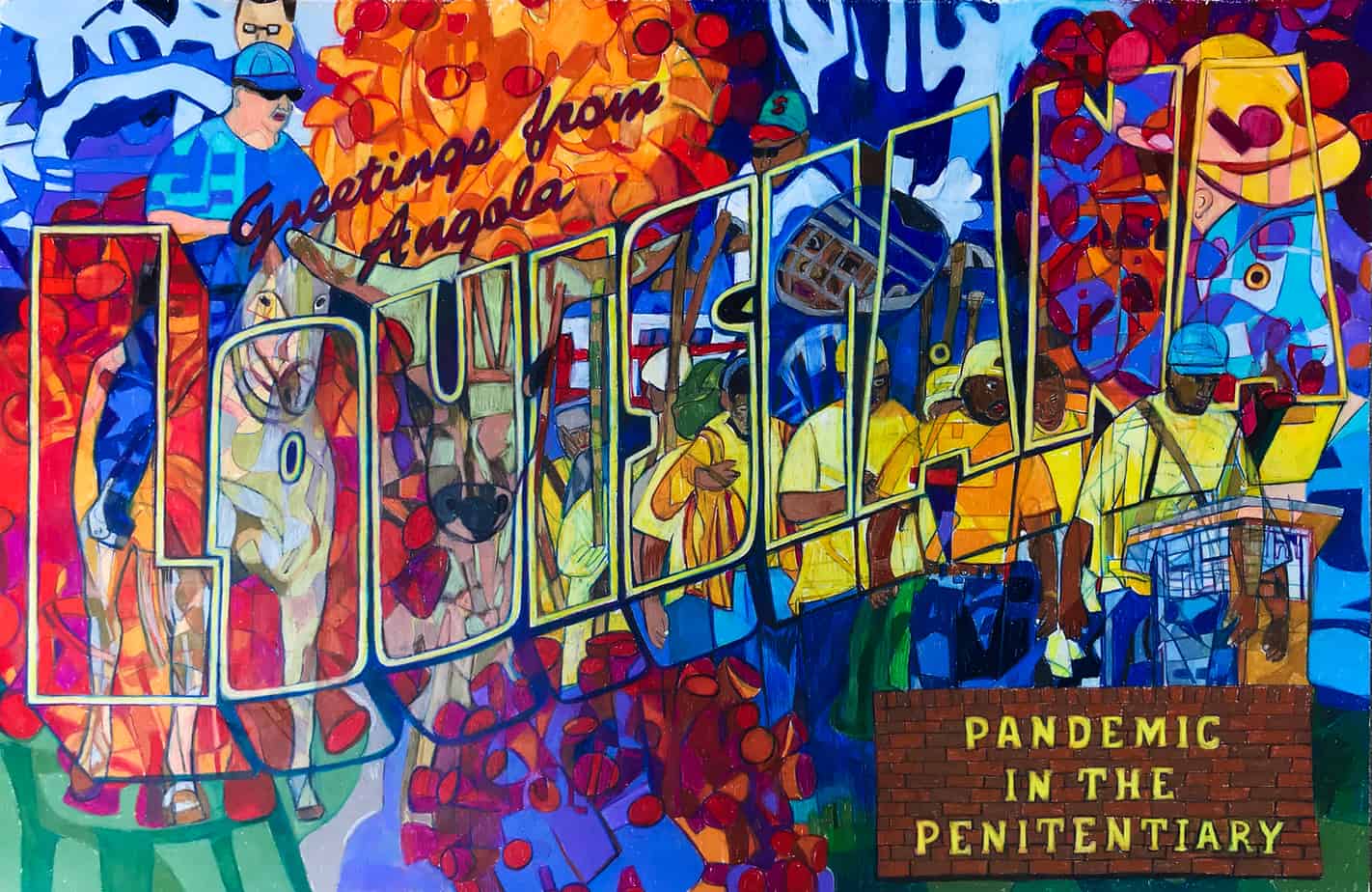 Angola Penitentiary was originally the Angola Plantation. It was named Angola since many of the enslaved people who worked on the plantation were from Angola Africa. In the sixties it was called the “bloodiest prison in the South.”  It has grown to the size of Manhattan. It is the largest maximum security prison in the United States. The inmates are predominately black and the guards predominately white. It has its own rodeo. Despite warnings from public health experts and an ongoing lawsuit, Louisiana is imprisoning infected prisoners from around the state at Angola’s Camp J, which had been closed due to a history of suicides and violence in the camp.

The pandemic with all its event cancellations has given me the solitude I need to write poetry. So along with the consolidated book of art and poetry House of Cards: The Whole Deck which is available on Amazon or at Ghostwolf Gallery, I am in the middle of editing a 116-page book of poetry (no art) titled Letters to the Deceased and Other Missives. None of the poems have been published before, but if you are an Albuquerque poet you may have heard drafts of a couple of them at open mikes, Zoom, or in a Facebook writing group.

I am looking for a few published poets who would like an advance copy and might be willing to write a blurb for the back of the book. The book could be called a poetry memoir, the title prose poem is below:

A Letter to the Deceased

Midway between your death and my father’s, two planes took down the towers where once we hovered over Manhattan that weekend in New York. Afterwards, we went to Coney Island like the young lovers we were and rode the Cyclone, not once but twice, spun on the Wonder Wheel, and drove disco bumper cars to the tune of Crash Goes Love. We stayed the night in Greenwich Village with an art school friend and then met a former housemate for dinner who was squatting in a condemned building, rent-free. That evening we all went to Danceteria with seven floors of music along with our future best man who later died in a Coney Island hospital.

When the towers came down, so did that last barrier I had erected to hold back my grief. I woke up at 4 a.m. every morning, drove to the office for a couple of hours of work before returning home and getting the boys off to school, listening to the radio on the way there and back. Then I would allow myself to cry to the accompaniment of news of death, destruction and war—knowing that you had gone at the right moment before injustice, hatred, and the racial divide engulfed us once again.

That was when I first encountered you in a dream, in a room of body bags stacked up like three thousand lost garment bags. I climbed to the top of the heap unzipping the one I knew was your’s, and you popped right up like a Jack-in-a-Box, and began talking to me as you had every evening when I would wake you up for dinner. As always we discussed current events, the latest scientific discoveries, movies, and the antics of our sons at school. When we finished talking, you laid back down and I zipped you back into the case, feeling strangely comforted.

House of Cards: The Whole Deck and Letters to the Deceased and Other Missives
will be available at the gallery. Poets are invited to write ekphrastic poetry
by viewing the artwork online or by coming to the gallery and submit
them to be included in a updated edition of the House of Cards: Ekphrastic Poetry.